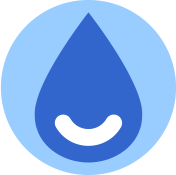 Fatbergs! Get to know more what happens to fats, oils and grease when it goes down your drain

Do you want to know more about what happens when you put fat, oil and grease as well as non-flushables such as wet wipes down your drain? Dr Raffaella Villa from De Montfort University can tell you more about “fatbergs”.

Do you want to know more about what happens when you put fat, oil and grease as well as non-flushables such as wet wipes down your drain?

Dr Raffaella Villa from De Montfort University can tell you more about “fatbergs”.

Q. What made you interested in the topic blockages of the wastewater systems due to FOG (Fats, Oils and Grease) and other non-flushables?

A. I have been working on biological treatment for wastewater and the use of bacteria for on-line treatment in sewers for the last 15 years. When FOGs enter the wastewater system from both domestic and food-establishment sources they can lead to the formation of blockages in conjunction with non-flushables such as wet wipes, coined “Fatbergs” by Thames Water. In 2017, a 250-metre-long, 130-tonne monstrosity was found under Whitechapel in east London – a piece of it still resides at the Museum of London. It has been named by the public as “Fatty McFatberg”. 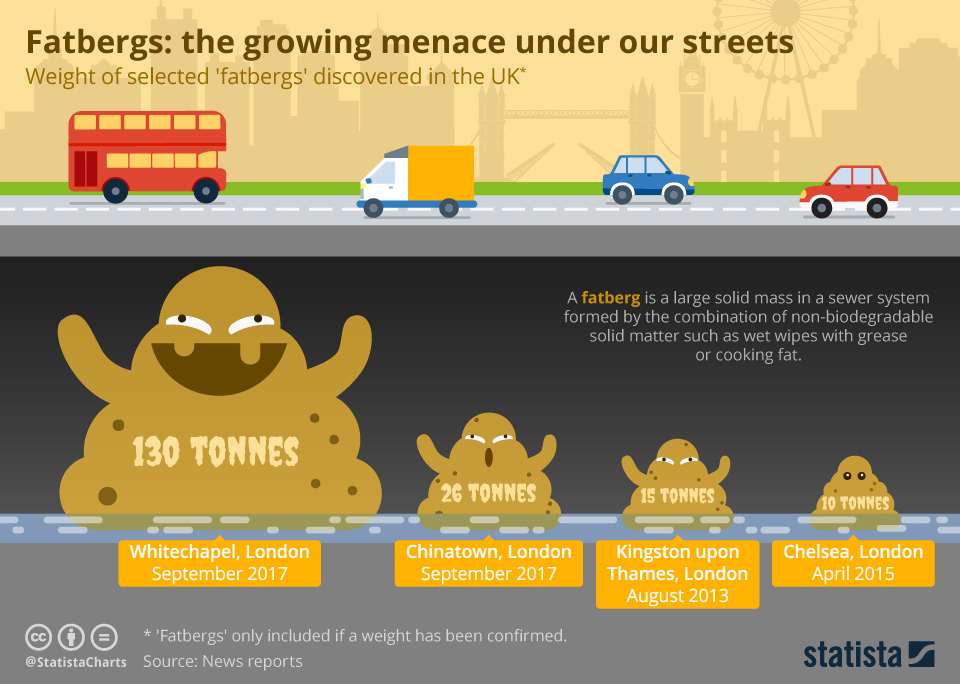 Q. What exactly is a “Fatberg”?

A. Fatbergs are made up of fat, oil and grease congealed around wet wipes and other things that people shouldn’t flush down the toilet, like cotton buds and tampons. A 2017 report by industry body Water UK found that, out of the solid items that could be identified, 93 per cent of the material recovered from sewer blockages were non-flushable wipes. Plenty of other items have been found inside fatbergs too: condoms and chocolate bar wrappers were spotted in parts of Fatty McFatberg.

Q. Is it mostly domestic fat in fatbergs?

A. As the name suggest, fat plays an important role in creating blockages, but other organic compounds can contribute to the deposits such as proteins and starch. Cooking oil from a pan, excess gravy tipped down the sink and salad dressing rinsed off a plate all contain fats that end up in wastewater pipes. Both commercial and domestic kitchens are culpable, but restaurants take the lion’s share of the blame because they prepare more meals and use more cooking oil than individual homes. It isn’t just places that prepare hot food: baristas who swill away coffee grounds and milk are also feeding fatbergs.

Q. What happens with a fatberg in sewers?

A. Thames Water estimates that fatberg removal costs over £1 million per month. In addition, blockages can cause flooding and release of sewage into the environment and thus pose public health and environmental risks alongside incurring extra costs and inconvenience to consumers.

Q. Are there any regulations that would help to prevent fatbergs?

A. The UK Water Industry Act 1991, which governs the nation’s sewers, doesn’t explicitly mention fats, but it does say that you shouldn’t pour away “any matter likely to injure the sewer or drain, to interfere with the free flow of its contents”. UK building regulations also state that commercial hot food kitchens should be fitted with equipment to filter out fat, oil and grease.

However, in January 2019 the new official standard identifying which wet wipes can be flushed down toilets safely was introduced. It is called “fine to flush”.

Q. How come some of my wet wipes already say they are “flushable”?

A. There are many wipes available on the market that are labelled as “Flushable”. However, they do not break down quickly when they enter the sewer system. It might be confusing to the customers. To receive the “Fine to Flush” symbol the wipes must pass the stringent tests which meet the standard. 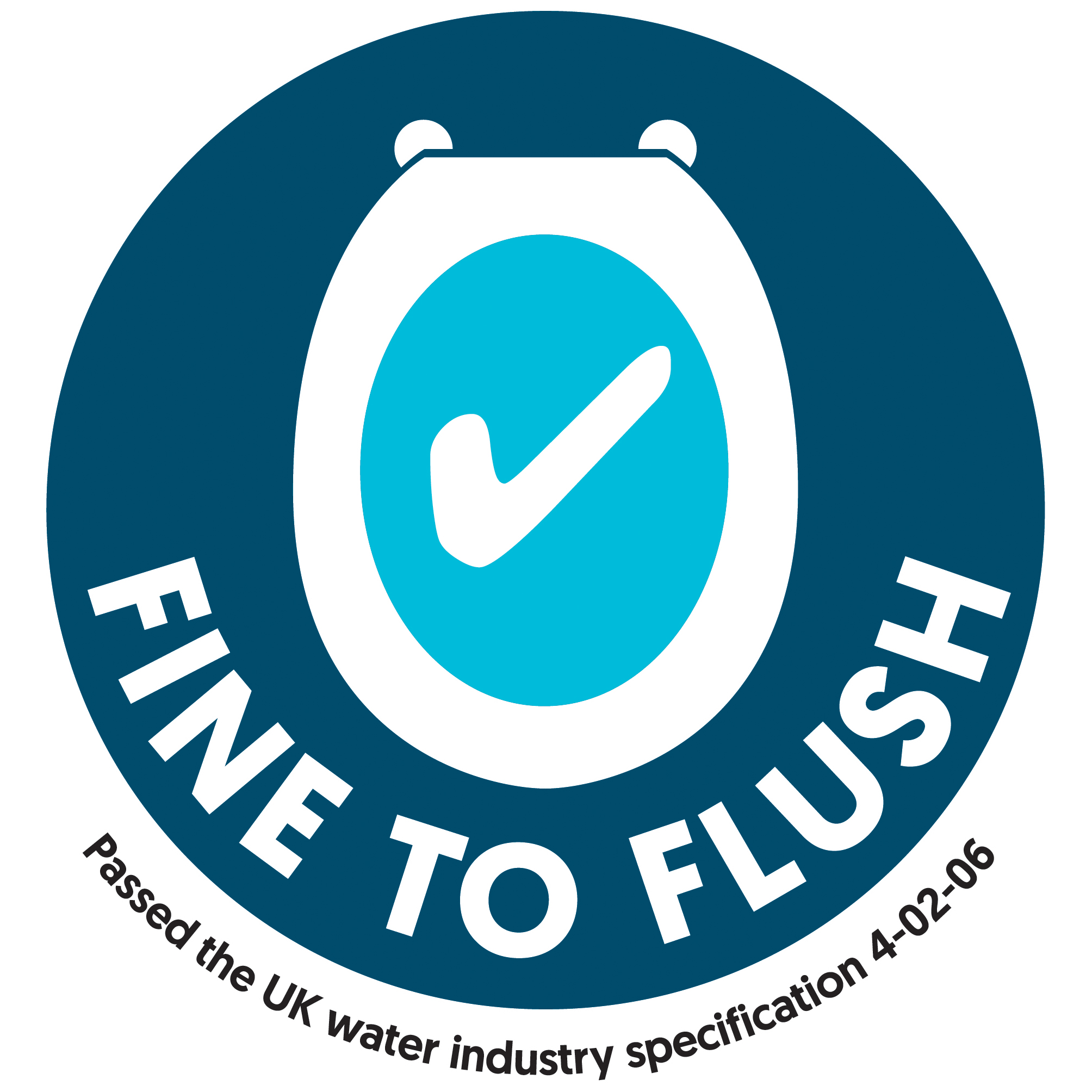 Q. How to prevent fatbergs?

A. For example, Dublin requires that waste water from restaurants doesn’t exceed a fat, oil and grease content of 100 milligrams per litre. Specific targets make it easier to enforce the rules, he says. “There tends to be a softly-softly approach with following up with restaurants.” The Dublin example shows how to fight the fatbergs. Before 2008, the city had about 1000 sewer blockages every year. That year, it began requiring food outlets to hold waste-water licences and started a programme of inspections, sampling waste water and promoting the importance of not letting fat out into the sewers. Since then, the number of blockages has gone down to fewer than 100 per year.

A. Doing the same in the UK might not be so straightforward. UK water companies are privately owned and don’t have the power to inspect restaurants themselves, only local councils do.

Q. What can we do in our households to prevent fatbergs?

A. Thames Water is focusing on educational campaigns, both for households and for businesses, to stop people contributing to fatbergs. Its “Bin it – don’t block it” campaign, launched in 2013, encourages people to flush only “the three Ps” – pee, poo and toilet paper – and to collect cooking oil in a container that can be put in the bin, rather than down the sink.

More on the topic of fatbergs in our next article where Dr Raffaella Villa tells us more about the research she conducted on a sample of a now famous “Fatty McFatberg”.

You have new comments.

Have viewed this issue

Shares of this issue